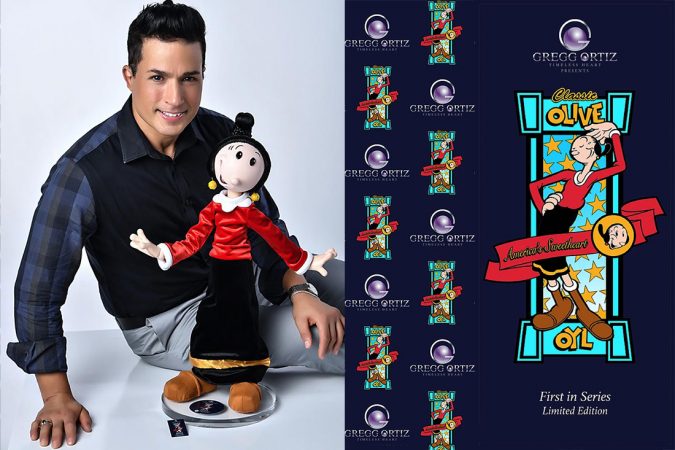 Olive Oyl is an iconic cartoon character beloved by many who hail from all over the world. She was created as something of a coy flapper by American cartoonist Elzie Crisler Segar for the daily King Features comic strip Thimble Theater, which was first published in 1919. Although she is often thought of as a supporting character to her more famous boyfriend, Popeye the Sailor, Olive was one of the original main characters and actually predated him. (Popeye first appeared in the January 17, 1929 edition, ten years after Thimble Theater’s beginnings.).

Olive was the youngest sibling of Castor Oyl and daughter of Nana Oyl (after “banana oil,” a contemporary idiomatic expression similar to “horsefeathers”). The names of more relatives, such as Uncle Otto Oyl, famed explorer Lubry Kent Oyl, plutucratic relation Standard Oyl and others, eventually expanded the whimsy. Olive was the fiancee of Harold Hamgravy until Popeye was introduced and, at first, she actually hated the ever-mumbling sailor man. The two fought fiercely until they finally realized that they “had feelings” for one another. The rest is cartoon history. A good celebrity couple, like Elizabeth and Richard or Brad and Angelina, Olive Oyl and Popeye the Sailor have provided plenty of drama over their nearly century-long paring.

Olive in the movies.

In 1933 Max Fleischer adapted the Thimble Theater characters into a series of Popeye the Sailor theatrical cartoons which were continued by Famous Studios and others, projectng the arc of Olive’s career over a century, from the funny pages through the cinema and on to TV. Most of Olive Oyl’s contemporary fans will have first encountered her on television through these now classic animations. Those fortunate enough to be familiar with the Max Fleischer cartoons of the 1930’s, which were featured on several “Popeye” cartoon shows of later decades, will know that Olive Oyl and Popeye both often talk to themselves under their breaths and that at these moments they say the funniest things.

In this author’s opinion, the Fleischer cartoons present these characters and their world at the zenith of their development; the concept had over a decade to mature and animation techniques and art had progressed to a point that dramatic possibilities and character development were unfettered. This period was a sweet spot in the progression from a relatively simple art form through labor-intensive animation in which all depended upon the artists and finally through to the more automated and economical (albeit less artistic and charming) methods used from the 1950’s onward. Olive Oyl has amused generations of followers through great social, technological and political change. She endures because we recognize something universal in her that remains constant despite the changing world swirling around her. We can therefore laugh at her and at the same time identify, or at least sympathize, with her.

This ball jointed vinyl doll version of Olive Oyl  is quite familiar. If ever there was a character made to be incarnated as a BJD, it is Miss Olive Oyl! She is tall, skinny and with huge feet. Her black hair is gathered in a tight bun. She wears a red satin shirt with long sleeves with collar and cuffs of white velvet. Her long black skirt has an orange line around the bottom which matches her ball earrings and picks up the tone of the suede shoes on her over-size feet. With her slightly protruding nose, signature smile and “realistically” posed cartoon hands she looks as if she wandered off the screen during one of her adventures with Popeye.

What a wonderful piece of Americana Gregg Ortiz has created, which will be appreciated by connoisseurs, doll and toy collectors, pop culture aficionados, comics collectors,  animation cinephiles and vintage television fans!

COLLECTIBLE DOLLS BY ARTISTS FROM AROUND THE WORLD