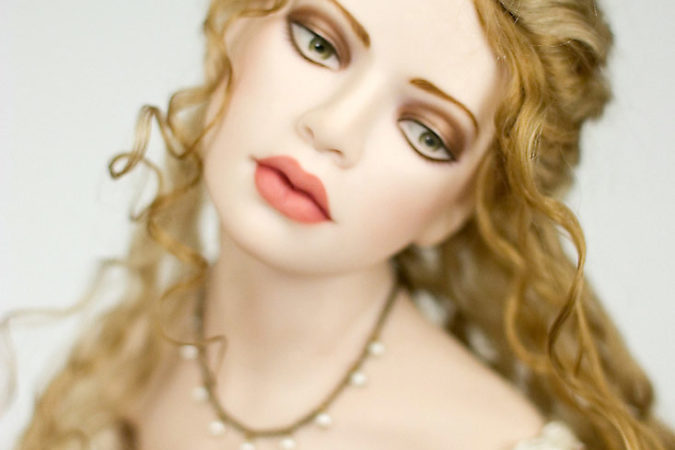 Tom Francirek and Andre Oliveira create art dolls,  hauntingly beautiful children and elegantly romantic ladies, in the diverse mediums of porcelain and poured wax dolls. Consider the limited edition art doll Eve, number eight of ten, 25 inches, as an example of their artistry. “Eve” is highly detailed painted porcelain. If you look closely you will see that the eyes, though very realistic, are painted rather than made of glass. In addition, the hands are finely detailed down to the finger nails and with delicately articulated, curving fingers. The hands are also held in a very natural pose. She is the most exquisite and limited among the art dolls presented here. In contrast, another of their porcelain art dolls. “Priscilla” has blown glass eyes. “Priscilla’s” graceful and realistically posed hands are more childlike but also very realistic, down to the similarly detailed finger nails.

About the doll artists: Francirek and Oliveira

Tomas entered the art world in the late 1980s when he was hired to manage Tussaud’s wax museum. Eventually he was made head of Tussaud’s Art Department but he yearned for more creative endeavors. After a while he left the museum to create art dolls full time. Andre pursued an academic career, majoring in the arts at university level. His interest was in multimedia artwork and design. The theme he kept returning to was the representation of the human form.  His friendship with Tom began a successful partnership. Originally a protege and assistant, Andre’s contribution eventually became an invaluable asset. Today, Tom and Andre are a successful team, creating a couple of porcelain editions yearly as well as several wax one-of-a-kind pieces.

Because collectors clamor for their work, they have produced a number of popularly priced collectible porcelain dolls for companies that cater to a general audience. The high quality and artistic excellence of the team was shown in these less costly pieces too. These dolls stand out in the less expensive range of art dolls and the name recognition of the artists enhances collectibility. Like art dolls by Francirek and Oliveira, they  represent elegantly dressed ladies in period costume. While the sculpting is not as detailed as in their high-end studio pieces, the quality is excellent in the popularly priced manufactured porcelain art dolls. Tom has visited Dear Little Dollies’ shop on several occasions so some signed pieces are available. Noteworthy about these factory manufactured dolls is that they were inspired by a packet of old photos discovered by the two artists while clearing the attic as they were moving in to a Victorian era house. It’s nice to realize that the charming doll Anna is the namesake of a person who might have lived in or visited that old house when it was new.

COLLECTIBLE DOLLS BY ARTISTS FROM AROUND THE WORLD